One of Lubor Fielders’s most popular and mind busting effects! He created it in 1963 and released it under the name Automat-2 Die. Later he allowed Viennamagic to release a professionally made version under the name Die-A-Bolic.

It is a very versatile die “with a memory”

The instructions cover several effects for small and larger groups. The method is typical Lubor Fiedler and lets just sy you will need a glass of water or similar.

Performer has spectators examine a small die and after they satisfy themselves that all is fair, they are requested to place the die under a coffee cup or paper cup while your back is turned, and for them to remember the number on the top of the die.
Spectator doesn’t have to throw the die. They can choose any number. Performer mentions about spectators always forgetting chosen cards when he does a card trick. He emphasizes the importance of their remembering the number they place on top of the die. Spectator is now requested to place the die in your hand when your back is turned, any number up. Performer places the die in his pocket. A second later he divines the spectator’s number.

You can perform Die-A-Bolic completely surrounded. It can also be used as a two-person effect, the die taken out of the room after the choice of number etc., and given to the medium.
Any spectator can take the die to the medium . Medium is instantly able to say the number that’s been chosen and to send back her revelation chalked on to a slate. Or the magician can telephone the medium and she names the number! 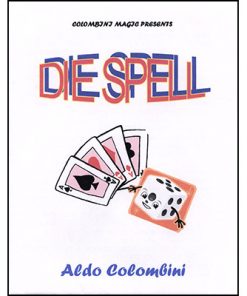 Add to Wishlist
Out of stock